Whether you are looking for a super creative, easy slime recipe, are looking for themed slime to make with your kid, or are just looking for sum fun, playful slime ideas – we have over 100 EPIC ideas for slime from A to Z.  Use this with your letter of the week program for teaching ABCs or simply as the ultimate slime guide to reference for new ideas. Either way, your toddler, preschool pre k, kindergarten, and first grade student is going to want to try them all! 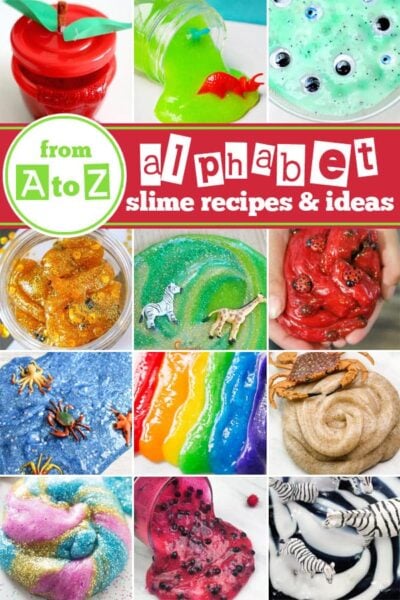 Do your kids like playing with slime? There is something about the unusual texture that calls to children. They want to touch and play with this fun sensory activity. Kids are actually learning about science as they manipulate the slime and watch what happens! I love hands on science for toddlers, preschoolers, kindergartners, and grade 1 students. Instead of grabbing your same old store bought slime, try one of these outrageously fun slime ideas to make a new slime recipe that is super clever and outrageously fun!

These alphabet slime ideas are great for hands on letter learning. You can make a special batch of slime for each letter of the alphabet.  Make some luscious red apple slime, try some bubblegum slime, or how about some edible candy corn slime! There are enough slime recipes and ideas on this list to keep you playing right through the alphabet. 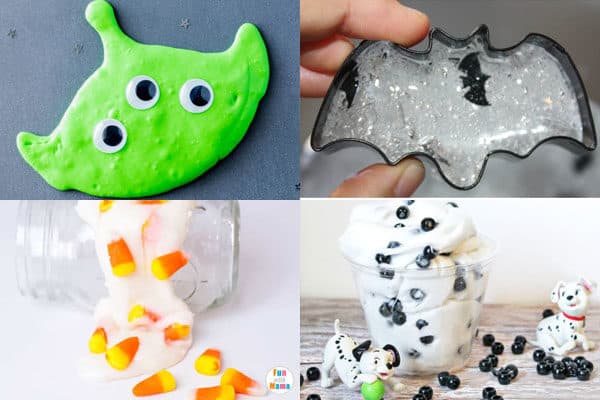 Each letter of the alphabet has a cool slime recipe with a fun slime ideas, or activity (or two, or three, or more!) to go with it. No matter what letter you are teaching there is a fun slime idea to try.

A is for apple, alien, and alphabet!

B is for buttons, bats, bear, blood, and bubblegum.

D is for dinosaur, dragon, and dalmations. 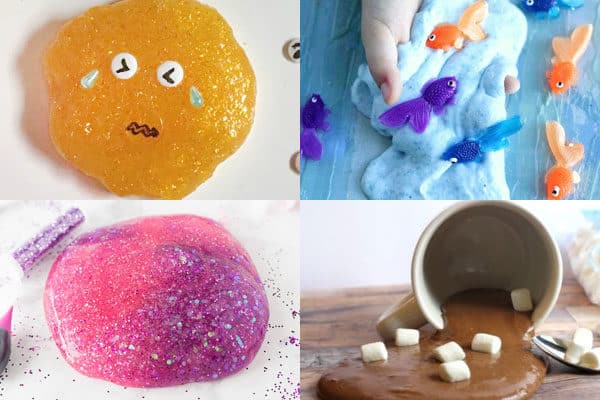 E is for eyeballs, emoji, and elf.

F is for fish, fairies, frog, and feathers.

G is for gingerbread, ghosts, gummy bears, glitter, and galaxy.


H is for hot chocolate, honey, and the Hulk. 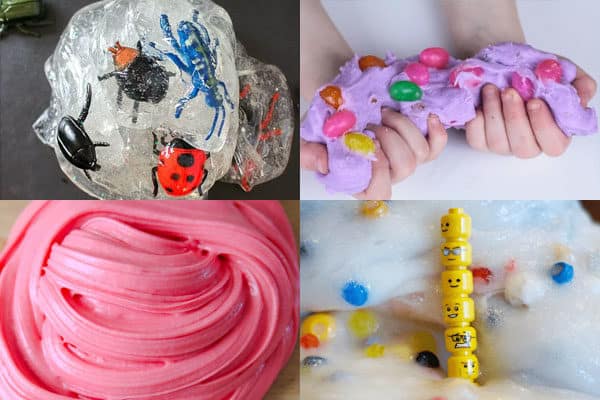 I for ice cream, and insects

J is for jello, jungle, and jelly beans.

K is for kool-aid

L is for lemon, lavender, Lego, and ladybug.

Use all these clever ideas to make memorable, sensory Alphabet bags for toddler, preschool, kindergarten, and first grade kids. 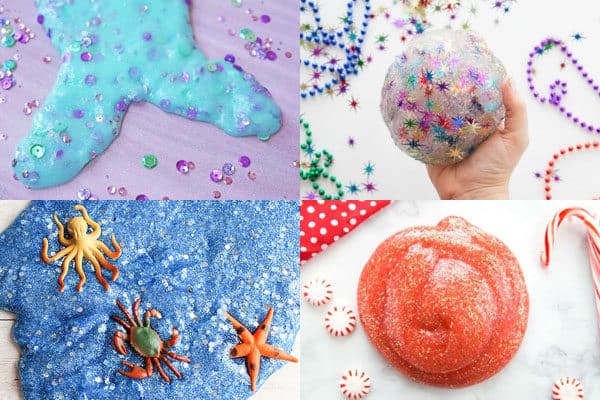 M is for marshmallows, monsters, mud, and mermaids

N is for neon, New Years, nebula, and night sky.

O is for ocean, and orange.

P is for pumpkin, peppermint, pizza, and princess. 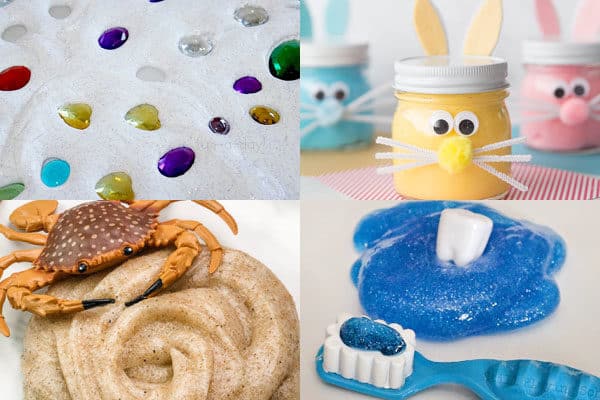 Q is for queen.

R is for rainbow, rose, and rabbit.

S is for shark, snow, sport, sand, and spiders.

T is for toothpaste, tree, tinkerbell, and trolls! 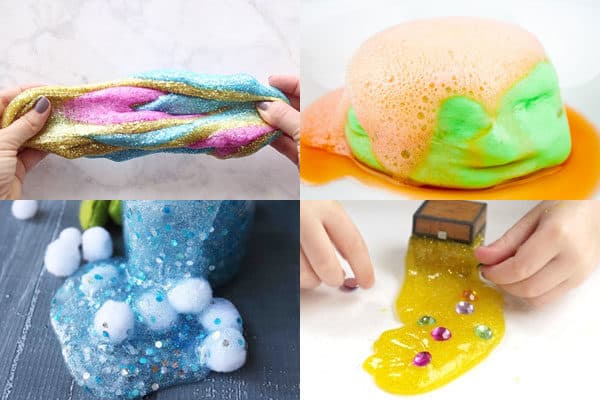 U is for unicorn.

V is for volcano and Valentines Day.

W is for watermelon, water beads, and winter. 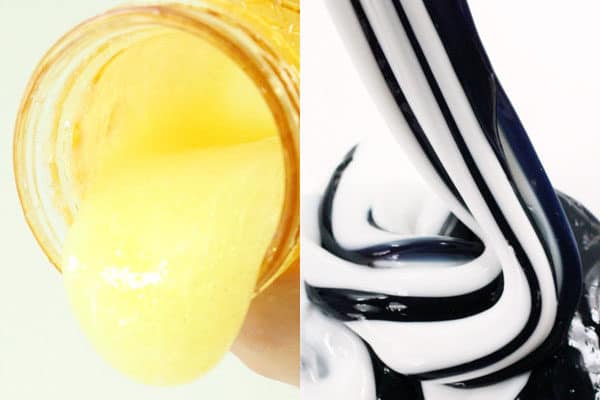 Y is for yellow.

Z is for zebra. 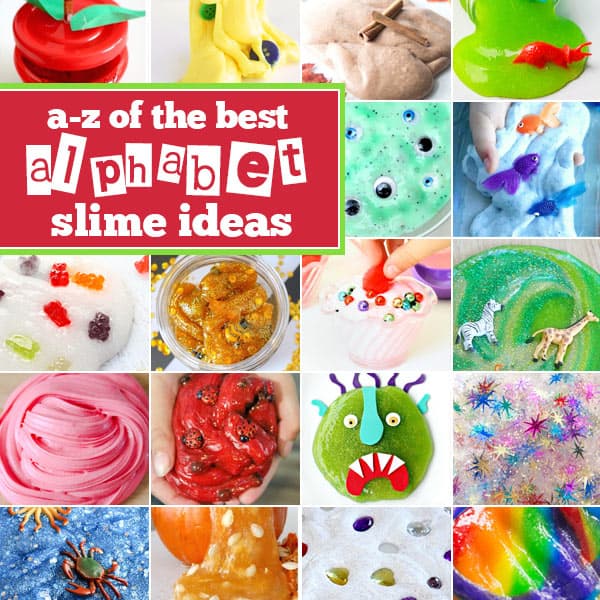 If you love slime then you’ll love this list of slimey alphabet ideas. There is a slime recipe or idea for every letter of the alphabet!

Kate is an Aussie Mum to four kids and an early childhood educator. She shares easy activities for kids, family friendly recipes and lots of printables on her blog picklebums.com